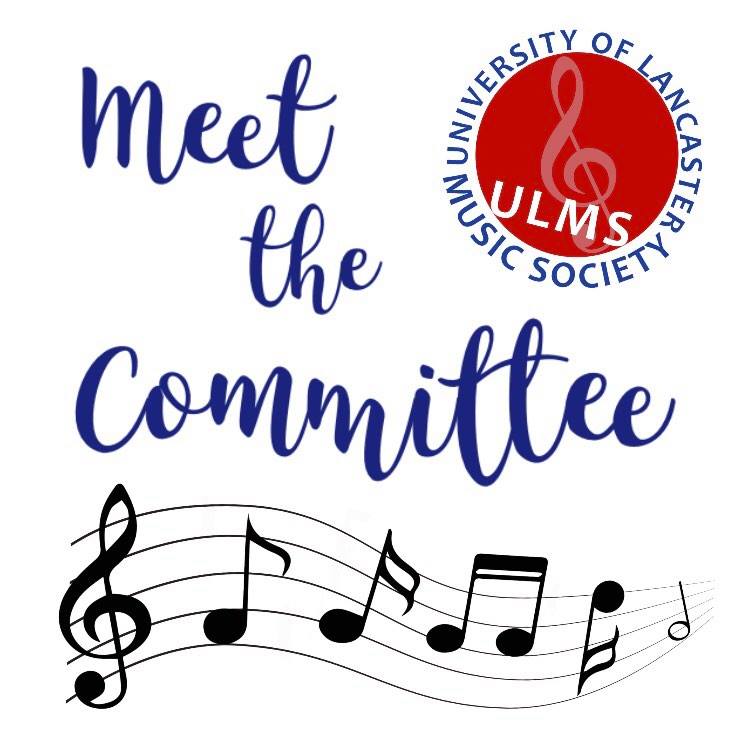 Ensemble Reps have a very important role within the society, as they make sure each group is running smoothly. They set up for rehearsals, represent their respective ensembles at Committee meetings and are responsible for organising concerts and what music is played. With this in mind, here are the reps for each major ensemble and the small groups rep for the coming academic year!

Toby is about to start his second year studying English Literature and Spanish, but was an experienced Big Band leader for two years before he arrived at Lancaster. Seeing almost all of the society come together at the Winter Ball was the highlight of his first year with ULMS, and after a lot of hard work training for a half-marathon over the past few months, as Big Band Rep he will be looking out for recommendations for pieces for the group to play and maybe even branching out into different styles of jazz.

Ella and Lizzy have both been Brass Band Reps in previous Committees – 2018/19 and 2019/20 respectively. However, as Brass Band is one of the society’s most active ensembles, participating in annual national events such as UniBrass and Whit Friday, this year they are taking on the role together.

Lizzy, a biomedicine student starting her third year, is an experienced Brass Band player, playing in bands both in and out of university. She has kept this up through lockdown, participating in virtual performances with both ULMS and Freckleton Brass Band, which is located near Lancaster. She has also been very lucky to have experienced many masterclasses from top performers in the brass Banding world, including Cory’s own Tom Hutchinson and Helen and Glyn williams. Outside of this, Lizzy has been busy painting, knitting, doing embroidery and binging Netflix to pass the time!

Ella, a French and Linguistics student, will be back at Lancaster this September following her year abroad in France, though that didn’t stop her from coming home to play with the Brass Band at UniBrass in February or participating in the 2020 AGM from Brussels airport! She has spent her time in lockdown teaching English to French teens over Skype. They are both very excited to be back in Lancaster for the upcoming year and look forward to playing with ULMS and seeing everyone again!

This will be Emma’s first year on the ULMS Committee, as they start their second year studying Computer Science. Their highlight of their first year with ULMS was Christmas – performing at various concerts as well as the Winter Ball. Over lockdown they have been reacquainting themselves with the piano, but at university they have enjoyed the friendly and welcoming atmosphere of Choir from the start. They intend to maintain this as Choir Rep, as well as continuing the tradition of bringing biscuits to every rehearsal!

Marsia, a Management and Entrepreneurship student, has an impressive musical background. Joining at eleven years old, she has performed both nationally and internationally with the Underground Youth Orchestra, one of the best youth orchestras in her home country of Greece and the first Greek orchestra ever to perform in Young Euro Classic. After a great year with the ULMS Orchestra, she hopes that her years of experience with many different styles of music, musicians of all ages and abilities and performing will set her up well for her first role on the ULMS Committee: Orchestra Rep for the 2020/21 academic year.

Amaia’s previous Committee experience includes ULMS Social Secretary alongside our new Secretary Louise and she is also a part of the university Handball Committee. As part of the String Orchestra over the past year, she particularly enjoyed performing Pachelbel’s Christmas at the ULMS Christmas Concert. An Astrophysics student about to start her third year at Lancaster University, she has kept up academically over lockdown with lots of reading and an internship in discovering galaxies for the physics department – as well as undertaking a sixteen-hour drive to visit family in Spain!

An English Literature and Creative Writing Student, Katie will be continuing with her role as Swing Group Rep, which she has had for the past year. Her most memorable ULMS moment from the past year was the infamous Christmas jazz concert Feliz Navijazz, which narrowly escaped disaster after several performers fell ill… Katie has been doing lots of reading, playing Animal Crossing and volunteering in her local Oxfam over the summer and will be returning to Lancaster this September to start the third year of her degree.

Caitlin and Zoe are both about to start their second year studying Geography at Lancaster. An expert in curating Spotify playlists, Caitlin was Musical Director for her school production of Legally Blonde before coming to Lancaster. Having particularly enjoyed last year’s Carolling Bar Crawl and Wind and Brass concert, she has been spending lockdown running, reading and having a rest before returning to university in a few weeks.

Zoe was a part of her local wind band in Southampton for eight years and competed in the national Music for Youth competition before coming to Lancaster. Her highlight of her first year in ULMS was everything Christmas: the Winter Ball, playing carols and Priory Christmas Concert. She has spent her lockdown doing plenty of arts and crafts, learning to play the ukulele and spending time with her family.

As Wind Band Reps this year, Zoe and Caitlin are eager to combine their experience, take requests for pieces for the group to play and manage difficulty levels to make the group enjoyable for musicians of all abilities.

You could be forgiven for thinking that Nathan’s degree was being a part of ULMS, as he has played with many ULMS ensembles and small groups throughout his three years at Lancaster so far – and has been very involved in the social side of the society as well. His ULMS highlight of the past year was playing with Inglourious Brassterds at the Christmas Markets last year, and now he is moving on from his previous role as Technician. He has spent a lot of his time in lockdown practising arranging music, and as Small Groups Rep he will be coordinating performances and showcases of existing small groups as well as supporting the establishment of new ones.

If you are interested in joining ULMS this year -Fresher or otherwise – please don’t hesitate to get in touch with our reps if you have any questions. You can find email addresses for each ensemble rep on the ensemble sections of the main ULMS website. Alternatively, you can request to join the Facebook group of the ensemble or ensembles you are interested in via the links below. Thanks for reading!