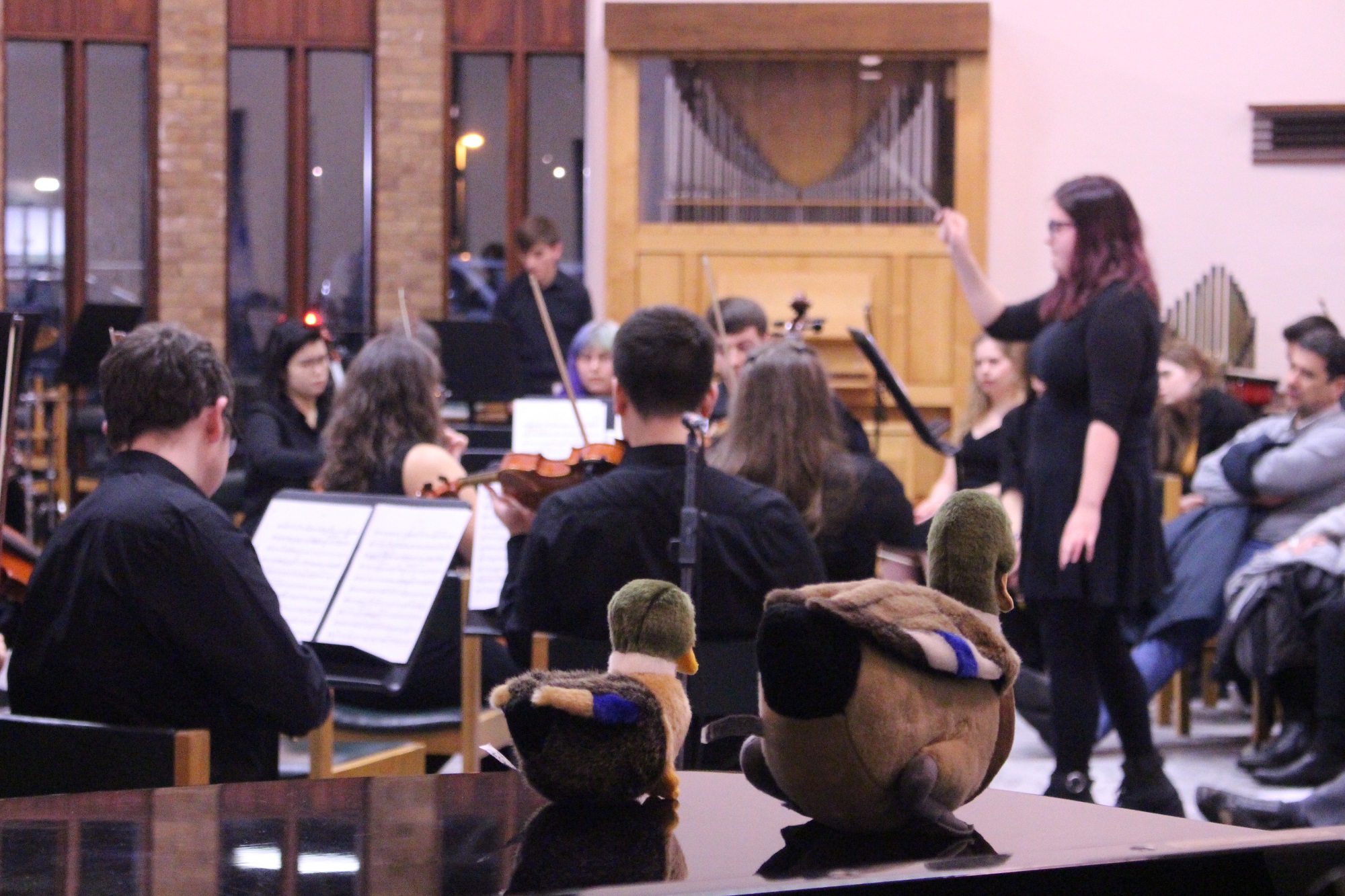 Well, the new decade has begun with a bang, and despite a fair dose of turbulence ULMS has had a busy and successful Lent Term. Here’s a look back on what the society got up to over those 9 weeks.

For the Big Band and Wind Band, first order of business this year was the Ballroom Society’s annual Charity Showcase in collaboration with LUDanS, LU Theatre Group and more. The Big Band served as accompaniment for the Strictly Come Dancing themed first half, also playing ‘Cry Me a River’ alongside soloist Isha Robbie as well as ‘Hot Toddy’, which featured clapping rather than playing from the (slightly disgruntled) sax section.

After the interval came Wind Band, providing the music for the mini musical, which this year was Grease! With music arranged by the ensemble’s own Alex Hardgrave and Chris Holloway, it was a fantastic performance by everyone involved, whether acting, singing or playing. Then, to close the show, another ULMS performance, this time by the Dance Band.

All money raised went to Morecombe Bay Food Bank and Cancer Research UK, so thank you to everyone who got involved to help these important causes!

Plenty of excitement for the Brass Band this term! The band went to compete at the 10th annual UniBrass competition in Bangor on the 8th February. UniBrass is a national competition where university brass bands come together at a host university to compete in an entertainment contest across two sections: Shield and Trophy. They claimed 5th in the Shield section for their performance, featuring a range of pieces from Broadway musicals including Cats, Miss Saigon and Chitty Chitty Bang Bang. Congratulations to them and their conductors, Henry Lay and Alex Hardgrave!

‘We were all extremely happy with our placing and feel we played the best we could! It was also a great time for members to get to know each other better and strengthen the band.’

The Annual General Meeting for ULMS took place on 12th February, kicking off (amongst other things) hustings for the 2020/21 Committee! More on this to follow in subsequent blogs… Thank you to everyone who attended and voted, and congratulations to our new Committee members.

The Concerto Concert, held in the Chaplaincy, boasted a huge variety of music and performances from the Flute, Clarinet and Chamber Choirs as well as the main Choir, featuring soloists Isha Robbie and Lucy Colbourne. But – this being the Concerto Concert – the main attractions were the Orchestra and String Orchestra. Congratulations to soloists Emily Hinks, who played the third movement of Mozart’s Flute Concerto No.2 and Louis Kirkman, who played the first movement of Violin Concerto No.4 by Haydn, for their fantastic performances!

The Big Band have had a busy term, travelling to Sunderland to compete against other university and professional Big Bands at the Great North Jazz Festival. There, they played ‘Strike up the Band’, ‘In the Mood’, ‘Skyfall’ and ‘Signed Sealed Delivered’ to great response! Judges were particularly complimentary about the band’s musicality and section work, as well as the strong solos by Isha Robbie, Thom Bull, Toby Smith, Jamie Payne and Alex Warwick. Well done to them and the band!

The Brass and Wind Bands were back in action on 7th March. The Brass Band moved through a varied programme of music, starting with a selection of Broadway hits including ‘Memory’ from Cats, featuring a solo by Julian Shield. They then moved to a march named after the idyllic Barnard Castle and some traditional Welsh folk music: ‘David of the White Rock’, with soloist Rebecca Jex. For their final piece, ‘Floral Dance’, the Brass Band were joined by 2019 graduate and former ULMS member Chris Holloway on drums: a brilliant end to a brilliant set.

Next came the Wind Band with contemporary music from films Stardust and Star Wars, as well as the gorgeous ‘October’ by Eric Whitacre. They also played some more traditional classical music such as Holst’s Second Suite in F; and the iconic prelude to ‘Carmen’ by Bizet, arranged for the band by conductor Matt Hall. They finished strongly with an ensemble favourite: ‘Critical Mass’, by Todd Stalter.

The brass masterclass took place two weeks before our trip to the Unibrass Competition. It was led by Richard Wilton, the conductor of the Championship section Shepherd Group Brass Band in York. He conducted various tonguing and breathing exercise to help with technique and critiqued the pieces they were due to play in the contest, in order to tighten up loose ends. His masterclass was extremely useful and got a lot of positive feedback from numerous members of the band as well as the two conductors. It was his second masterclass with the university Brass Band and we are hoping to have him back again next year in preparation for Unibrass 2021.

Wind Band were also treated to a masterclass by the trombonist, conductor, teacher and composer Adrian Taylor to prepare them for Wind and Brass in Concert. He gave some particularly useful advice on tuning properly and blending together as a whole ensemble for players, and also helped the technique of the two conductors. Overall, his visit was considered very beneficial in the run up to the concert and Wind Band hopes to see more visits like this in the future.

Finally, we welcomed back singing teacher and conductor Don Gillthorpe who came in on March 12th to give a conducting masterclass, splitting his time between Choir and Orchestra. Giving advice on posture, how to hold the baton and how clear their beats were, Don also gave individual feedback on technique and improving confidence.

‘I thoroughly enjoyed it and found his comments helpful for improving my technique! Hopefully I’ll get chance to put them to use when we get back to rehearsals.’

ULMS’ small groups have also been out and about performing throughout Lent Term. The Clarinet, Flute and Chamber Choirs could be seen playing at Lancaster Arts events in the Great Hall as well as the University’s Concerto Concert, while Lancaster Brewery was graced by the presence of our Inglourious Brassterds for two gigs at its very first Frühlingsfest event in February. They also played at the final of Bailrigg FM’s Battle of the Bands; further congratulations are in order for another of our small groups, the Dalton Collective, for making it to the final of this competition! Members of the society also had the opportunity to see all of the small groups perform on March 4th in the Small Groups Showcase, which was a great night.

Lent Term has also seen the establishment of a brand new small group: we’d like to welcome the Barbershop group! Looking forward to seeing how it develops when we return to Lancaster.

As ever, ULMS is indebted to our social secretaries, formerly Louise Frankland and Amaia Imaz Blanco, now Isha Robbie and George Allin, for organising a variety of events for the society to enjoy. Kicking off strong with bowling and Wetherspoons, throughout the term we have also had a classic quiz night hosted by the iconic Sean Barlow, a games night, karaoke and two college bar crawls to celebrate the Committee handover and St. Patrick’s Day.

Lent term has also seen Project Teach Music continue to grow with the purchase of new music. A couple of final pieces of news – and let’s face it, the ones you’ve all been waiting for: we have purchased some new stands (yay!), and we have a brand-new mascot! We are pleased to introduce RONald Quack Hylton, a new companion for Roger (who is now safely back with the society after his mystery hiatus).

ULMS would like to thank everyone who has come out to see us this term and the masterclass instructors for all of their help. Thanks also to all of our ensemble conductors, the 2019/20 Committee for all of their hard work over the past year, and to the new 2020/21 Committee. Finally, thank you to everyone in the society! It’s been a fantastic term and we couldn’t have done it without you. We’re not quite sure what’s in store over the coming months, but hope to see everyone soon.

Stay well and thanks for reading!