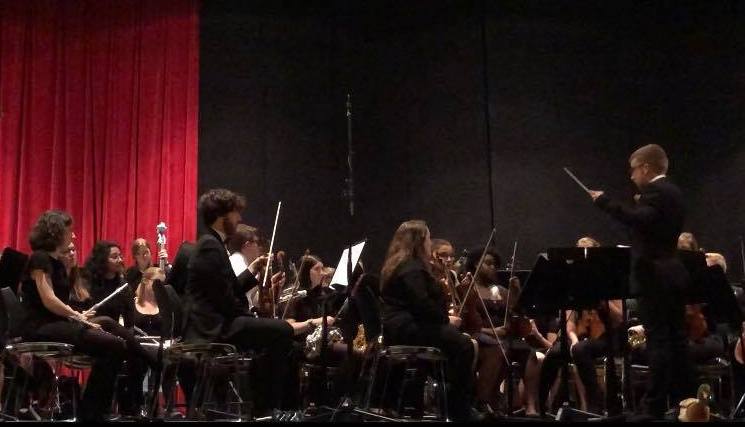 It’s been 24 hours since the summer showcase yesterday and it was once again a great show of our societies talent. It was the biggest night in the societies calendar and it was truly a tremendous evening. It’s astounding how much talent could be fitted onto one stage last night and just how varied the society can be showcasing genres from classical to jazz and pop. Weeks of preparations had been leading up to this day, with people attending rehearsals nearly everyday.

“Every aspect of last night ran so smoothly, the musical quality was phenomenal,…,the audience was huge and the feedback has been very positive”

Rehearsals started early on Saturday morning after a long showstopper rehearsal the evening prior. These rehearsals were crucial to the smooth running of the showcase allowing conductors to remind players of the little things like dynamics and articulation, as well as reps being able to sort out seating plans. It was a great sneak peak into the societies talents and everyone was busy preparing hard for the evening ahead. Rehearsals ran from 10am through till 5pm (with well-deserved breaks of course!) allowing final tweaks to be made so come the evening everyone was ready to perform.

Roll on 7pm and a room full of anxious performers were getting ready backstage while many tickets and programmes were being sold out front. Final checks of the great hall were being made as Dance Band entertained the crowd eager to get to their seats. After enjoying the ever upbeat set from Dance Band, the audience made their way to their seats where they were then entertained by Flute Choir from the balcony who are always a delight to listen to, playing more traditional Gaelic pieces as the audiences awaited the start of the showcase.

Half 7 soon rolled around and the concert began. One by one each ensemble performed their set better than they had ever rehearsed it and the showcase ran smoothly without a hitch. Sean Barlow and Ella Clarke were the comperes for the evening, giving the audience facts about the society, each ensemble and some unforgettable stories along the way (including about the guy in String Orchestra who got a suit flown in from Holland by another violinists dad). The comperes did an amazing job at introducing each ensemble and filling the gaps between bands while the stage was being reshuffled. They were a credit to the society and were flawless in their presenting skills. Sean and Ella really added flare to the showcase and allowed the show to run continuously as each set flowed into the next without much hesitation.

The interval saw Clarinet Choir perform (who were later crowned ‘Small Group of the Year’) who filled the foyer with a warm atmosphere matching that of the one created throughout the showcase. They entertained the audience while they got refreshments before they all returned to the great hall for the highly anticipated second half.

Each bands set showcased their full potential, showing off their technique, tone, dynamic range and talent. Not one performance could be faulted and every single member of the society did themselves and the society proud. The audience agreed as they enjoyed each and every set of the evening. A special mention must go to each and every one of the conductors who had been preparing their ensembles for this concert for weeks now. Each one truly gave it their all and did a tremendous job as they lead their ensembles through their tricky sets, wowing the audience as they went. It’s not easy being a conductor and it is very nerve-wracking standing up in front of an audience of 250 people and guiding the ensembles through their pieces, so each conductor deserves a massive well done for all their hard work this year. Some of these conductors are staying on for the next year but others are passing the baton onto a new generation of conductors. Whitney Rawlins, who has been conducting the Swing Group for the past four years, is giving up her baton this year as two new conductors take over next year. We are thankful for all the years she’s put into ULMS and for all her hard work over the past four years as a conductor and even more years as a player. We wish her well for her future adventures.

The showcase ended with the showstopper which this year was a La La Land medley. Morgan Winyard had the pleasure of conducting the piece which was arranged by Hannah Bayliss. After an intense Friday evening rehearsal followed by a shorter rehearsal on Saturday afternoon, the showstopper sounded amazing when finally performed on stage. The amount of work that went into the showstopper both from arranging the music to the hard work the performers put it to make it sound flawless was amazing and every single person deserves to be so proud of themselves and how well the final performance turned out.

“Hearing my arrangement played was a dream come true, thank you”

Behind the scenes committee worked hard ensuring all the ensembles were ready to go on stage and ensured the concert ran stress free. The reps made sure each person in their ensemble had the correct music and they were ready to change the stage before their ensembles performance. Committee were also responsible for selling the tickets and programmes, manning the fire exits and serving the role as stage managers to help the night run smoothly. Being on committee is one of the best experiences and while at times it can get stressful, the rest of committee is always there to help you out and seeing nights like this come together at the end makes it all worthwhile. Putting on such a large scale showcase is tough especially since Lancaster has no music department but the amazing group of people that committee is made up of this year made it one of the best showcases the society has had.

A final mention must go to the one and only Chris Holloway who was this years recipient of the president’s award. This award goes to someone who is usually graduating and who has given so much to the society over their time at university. This year Chris will be leaving us after four years of being part of the society. He has given so much: from arranging last years showstopper (SoundShrek), to playing percussion or singing in nearly every ensemble as well as arranging cheesy pop songs for many small groups and has even spent time on committee as small groups rep. There’s not much Holloway has not done over his time here. He is a friendly face who will definitely be missed next year as he is bound to light up whatever room he walks into. In the social afterwards Chris was also the recipient of ‘The ULMS Award’ (a society voted award for contribution to the society) and ‘Musician of the Year’ – both which were highly deserved. Seeing Chris’ face light up on stage when Henry awarded him the Presidents Award was unforgettable as he was beaming from cheek to cheek. Chris will be missed by all next year but I’m sure his face will be popping back before long at one of our events be it a concert or a social.

“I can’t believe 4 fantastic years in ULMS has come to an end…it’s been 4 years I’ll never forget. Thank you for being some of the greatest people I’ve met and congratulations on putting on stunning shows every time”

We wish Chris and all other graduates this year the very best on their new ventures and they will all be missed by the society as they all bring so much talent and enthusiasm on a daily basis.

Thank you to everyone who came to show support to all of our performers yesterday, we all hope you enjoyed the showcase and we look forward to seeing you all again in the future.