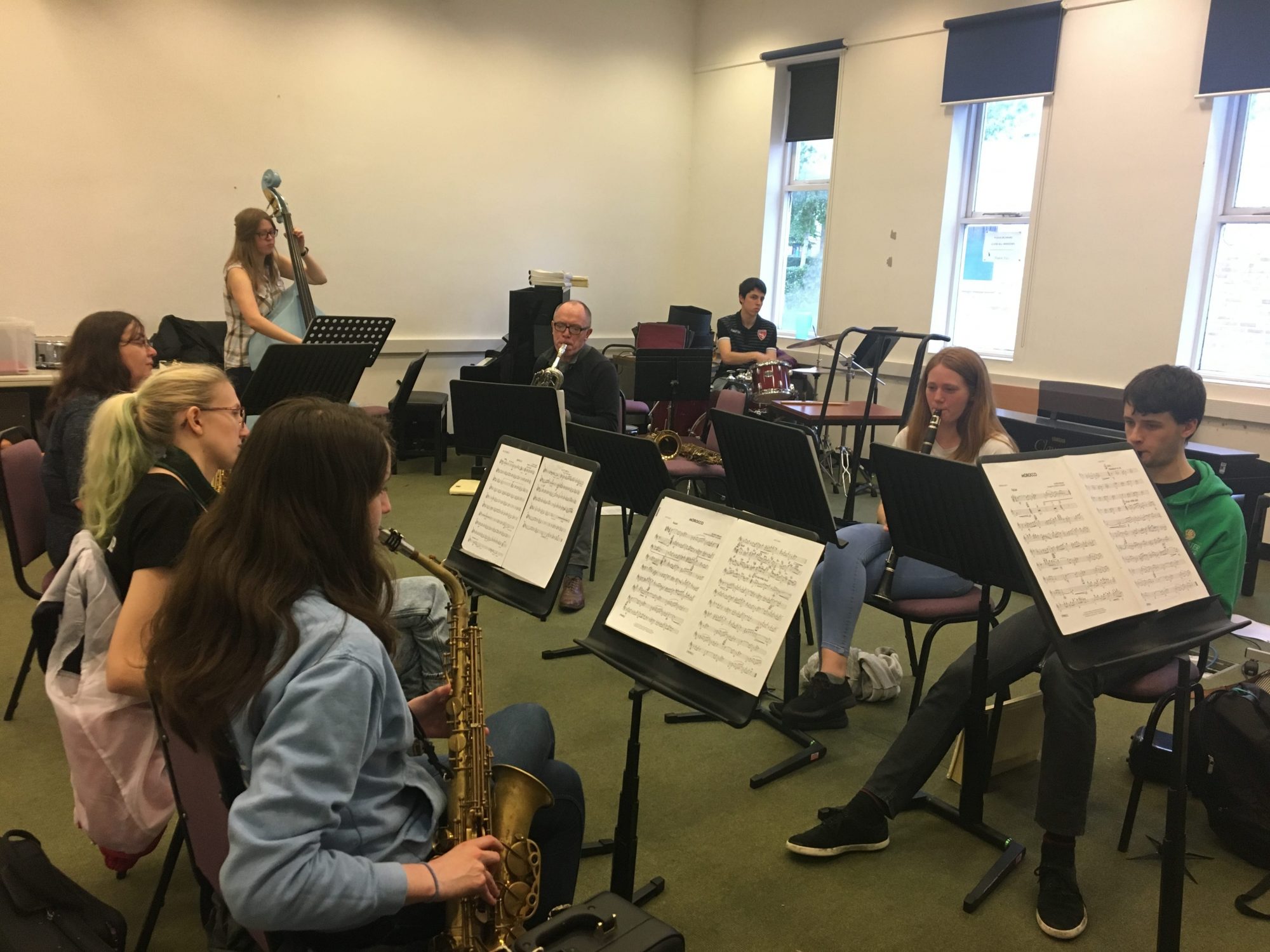 We are now over halfway through our ensembles having visited four out of seven of them already this week. And with just one week left to go, we move swiftly onto our next major ensemble and it’s another jazzy one with Swing Group. Their current rep is Katie Farr and they are conducted by Whitney Rawlins (who has been conducting the ensemble for the past four years!)

As with all of the other ensembles, we start way back in October with the Freshers Concert. Whilst being a smaller ensemble, Swing Group make up for this in terms of their sound. Having clarinets instead of trumpets, saxophones, a double bass, drums and a piano gives the ensemble a unique blend of instruments and sounds setting them apart from our other major ensembles. Swing play a mixture of jazz pieces from across the ages some of which include a vocalist (or just vocals from the band like in the band-favourite piece ‘Minnie the Moocher’). Fresher’s concert saw the band welcome both new clarinet players and new saxophonists where they played a smaller selection from the set they performed at last years Summer Showcase. Swing Group have come a long way over the last year both in terms of numbers and sound and this can be seen in their playing and performance.

Swing’s first gig of this year came from the Polish society; in which the band played a range of 1920s themed swing pieces to help the Polish society celebrate their independence day. Having a gig so early on in the year meant Swing had little time to rehearse but their performance sounded like they’d spent years perfecting the music and their techniques and an enjoyable evening was had by all. The Polish society were even up on their feet for most of Swing Group’s set!

At Christmas, alongside Big Band, Swing Group partook in ‘Hark the Herald Angels Swing’, which this year took place in Barker House in Cartmel College. Playing a mixture of classic Swing pieces as well as jazzy twists on Christmas classics, Swing Group put everyone in a christmassy mood and started off the festive season with a bang. Less than a week later, Swing were back in Barker House performing at Cartmel Winter Ball. Again, playing a varied set of jazzy Christmas tunes and other soft jazz and swing pieces to accompany Cartmel’s meal, Swing Group spread the Christmas cheer far and wide.

The new term saw new ventures for Swing Group and as new rep Katie Farr took over from Issac Costa, Swing Group were sounding stronger than ever. The end of Lent term saw Swing Group play at a Swing Dance society social. This is the second time that Swing have been asked to play at one of their events and both times they have represented the society well and created a brilliant atmosphere for Swing Dance. All the players in Swing pick are able to pick up the music quickly and this means they have a lot of pieces under their belt ready to be played at events like this throughout the year where they are able to showcase their talents to wider audiences.

This term has been full steam ahead for Swing as the last preparations for this years Summer Showcase get underway. Swing have been working hard and Whitney has been keeping everyone on their toes as she commences her last term as conductor of the band (next year she is returning to playing her saxophone in the ensembles as two enthusiastic conductors take over from her). Swing has another long serving member in the form of baritone saxophone player Tim who has also been a member of the band for many years. These players dedication to the society and their ensemble does not go unnoticed and shows just how enjoyable being a member is as they keep coming back for more!

Swings pieces this year are set to be even better than the last year as they’ve been practicing for months on the nitty gritty parts of the music in preparation for the showcase. Their set compromises of a varied list of jazz pieces which are sure to put everyone in good mood and make you want to dance along by the end of them. Swings hard-work this year is sure to shine through their set and the pieces compliment their technique and sound nicely.