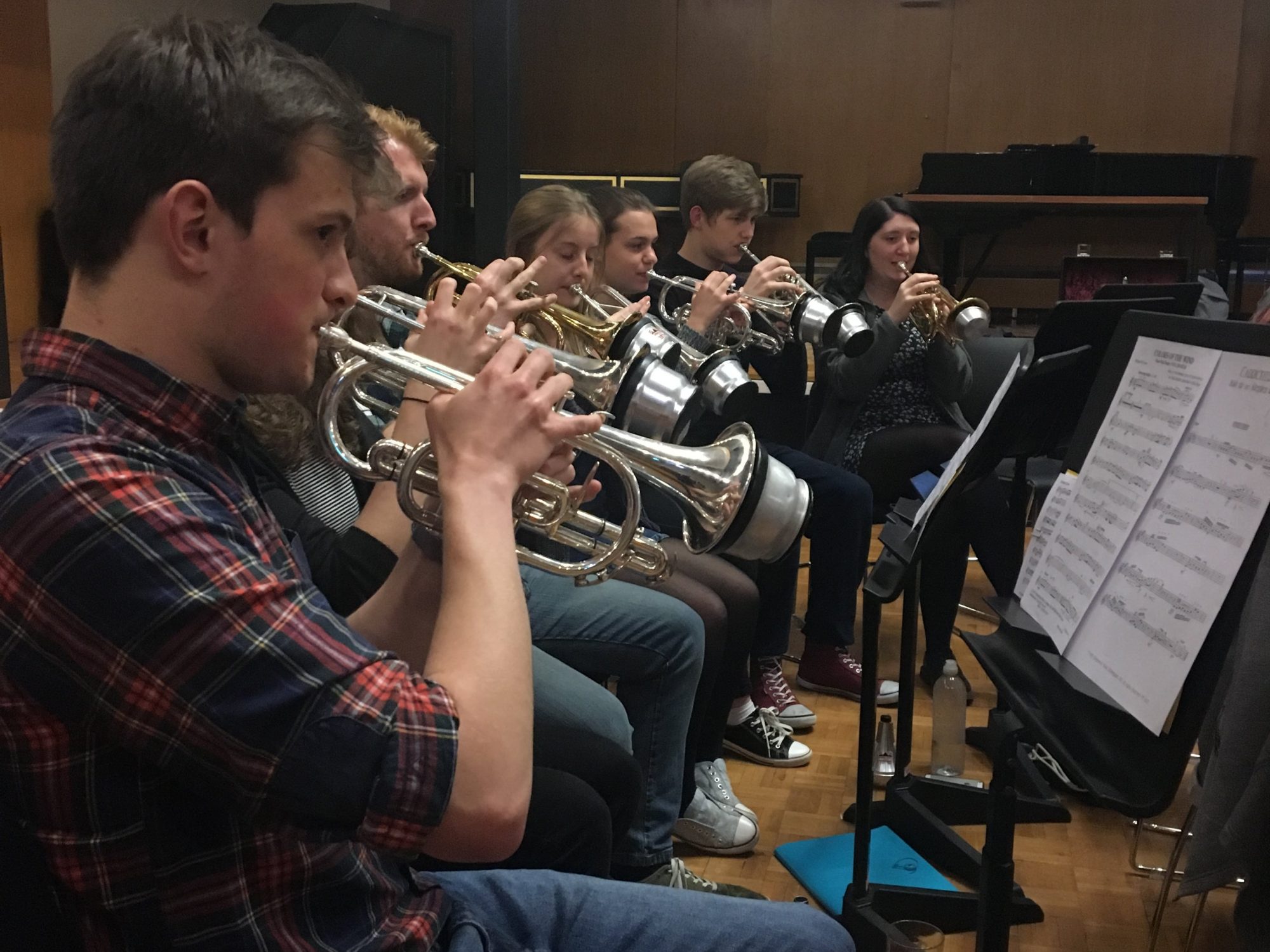 Preparations are in full swing for the Summer Showcase and it’s crunch time for each ensemble to perfect their set and get in them all important run throughs. Next up we visit Brass Band to see what they’ve been up to this year. Brass Band’s current rep is Lizzy Morritt and they are conducted by Tom Wells and Morgan Winyard.

As ever, Brass have had a rather busy year this year with many competitions and concerts to keep them occupied. As tradition, they started the year with the Freshers Concert in which many new members were introduced to the band. Brass Band sure impressed at this concert and the unique blend of all the instruments created a rich sound and their set showcased off the technique of each individual player. The Freshers agreed with many more joining the band after this performance; causing the band to rise to its biggest numbers with over 30 players regular attending rehersals.

At Christmas the band took part in the annual ULMS Christmas concert held in the Priory, alongside many other of our major ensembles. Taking on some Christmas and brass band classics, the band filled the Priory with their abundant sound; creating a warming and pleasant atmosphere which was relished by all. Ending the concert is a tough job but the brass band pulled it off and gave a memorable performance which left the audience in the Christmas spirit. Unique to the brass band, they were also invited to perform at ‘Deck the Town Hall’, a Christmas celebration that takes place in town each year run by the Christian Union. They dusted off their carol books and provided accompaniment for all the carols played that evening. Many players from the band also participated in the Carolling bar crawl, a social which sees the society travel across campus celebrating the Christmas spirit, by playing carols for everyone to enjoy and to help end the term on a Christmassy high.

Alongside the typical concerts that Brass Band takes part in; they also have a couple of competitions in which they compete. Lent term saw the first of these in the shape of Unibrass which was held in Bangor, Wales this year. Unibrass is a national competition where over 20 university Brass Bands gather together to perform an entertaining and musically demanding setlist across two sections. The theme this year for our brass band was a train journey, where we began in Cornwall, visited Norway and ended in Oz! In the evening they all attended a Gala concert held by Tredegar Town band; followed by a social with all the other bands which featured the group, Atomic brass. Unibrass is by sure a highlight in the Brass Band calendar and it’s an event held close to the heart of all in Brass band (along with many within the rest of the society). Brass Band honoured the society in representing our name to a wider audience; and we are all immensely proud of the performance they gave. Keep your eyes peeled for more news on our bid to host Unibrass in 2021/2022.

The end of Lent term saw Brass band take part in the new concert; An evening with ULMS Wind and Brass bands. Being the first concert of its kind, it was key that the Brass band hit the right note in this concert in order for it to become an annual event. The Brass band did not disappoint and the concert was a fantastic showcase of their talents as they performed an array of pieces ranging from musicals, to marches as well as showcasing individual players with solos and duets showing the versatility of them as a band. The society is all looking forward to this becoming a new annual ULMS concert for both the Brass band and the Wind band to participate in; allowing them to demonstrate their ability’s and to create an entertaining set for everyone to enjoy.

The beginning of the summer term saw the Brass Band take part in a masterclass lead by Richard Wilton, the conductor of the Championship Shepherds brass band. This is the first masterclass the society has held this year with more being planned to take place in Michaelmas term next year. All members of the band found this masterclass really helpful in their preparations for this years Summer Showcase and they hope they can use the skills they learnt to unite and create their most rich-sound and technically demanding performance of the year.

“The masterclass has helped the band improve massively, allowing us to find our sound as a band together and utilise our skills to the best level. Having a rehearsal lead by such a high-level conductor has benefited the band as well as each player individually.”

Today sees the Brass Band take part in another competition the Whit Friday march competition held in Saddleworth. This is an annual marching competition that brings together brass bands from all other the county of all different levels. Each band performs two marches; one walking down the high street and another standing, more technically difficult march. This event is normally great fun and we all the players get fully involved by dressing up to their chosen theme; which this year is the Bare Necessities. It is a fantastic way to end the brass band competing season and to celebrate the end of exams for many of the participants.

Brass Bands rehearsal have been coming along well in the last few weeks for the Summer Showcase (and for White Friday). Since the masterclass took place; the determination of the players to become an even more tight knit unit and to improve their playing even further has become clear and is shown through their dedication to rehearsals and in the sound produced when they perform. Their set this year is compromised of different genres and without giving too much away showcases an array of talents of instruments and it is sure to give an enjoying opening to this years Summer Showcase!

“We are looking forward to showcasing our talents at the summer showcase and demonstrate how much we have improved over the last year! It will be an exciting opportunity to collate the entire society in one night to celebrate the fantastic year the ensembles have had.”

Brass Band rehearse on a Wednesday evening from 6:30-8:30pm in the JHR. For more information contact Lizzy Morritt (Brass Band Rep) at brass@ulms.ac.uk or message the Facebook page.