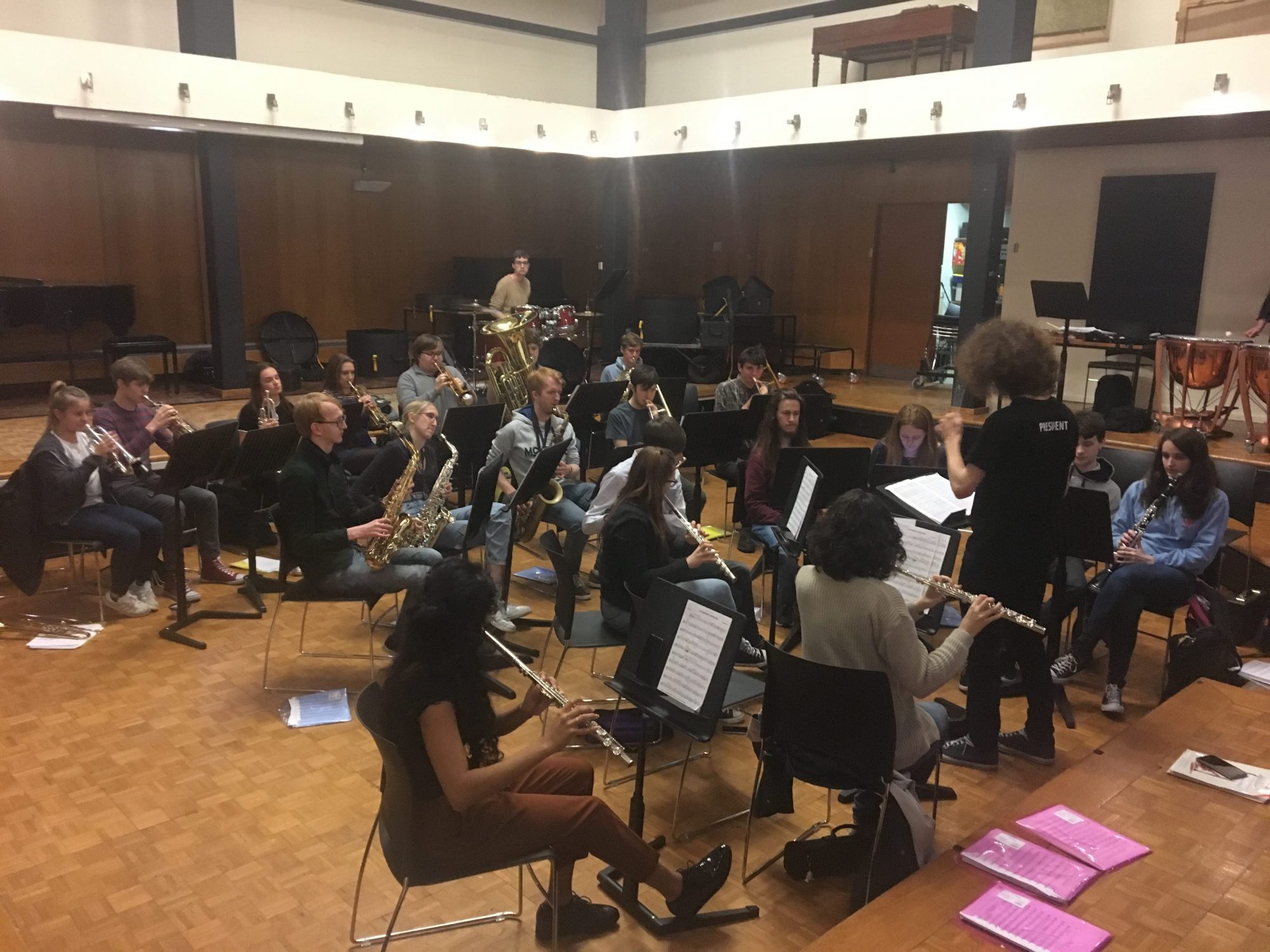 One day more. Another day, another rehearsal. With the days flying by so fast, every minute of preparation is integral to ironing out the last of the mishaps and ensuring each piece is the best it can possible be. Today we move onto one of our largest ensembles – Wind Band whose current reps are Fiona Bower and Amrit Phull and they are conducted by Sean Barlow and Henry Lay.

Being one of the largest ensembles, Wind Band have had their fair share of concerts and gigs this year. Starting back in freshers week, the question on everyones minds was will the JHR have room for any more trumpet players? Lucky for Wind Band the answer was yes and they welcomed many new players with open arms – causing the Band to grow in size to its biggest numbers ever. The large numbers aided Wind Band’s performance in the Fresher’s concert, where they blew everyone away with the strength and tone of the sound they produced. This performance showcased how versatile Wind Band can be and encouraged even more new players to join the ensemble; with rehearsal numbers growing even more.

Fireworks night saw Wind Band return to performing in Lancaster Square and despite the weather not being on their side, Wind Band’s determination shone through and they completed their set (with the loss of only a couple of pages of music) and impressed the audience with their memorable tunes. This performance was the first concert Wind Band did to an outside audience and they did not fail to impress! Their set complimented the players and conductors well and proved just how versatile wind band can be – showing their ability to play in different styles and in different situations. Being one of the more trickier concerts Wind Band undertook this year (due to the conditions in which they had to play in), they proved their adaptability and versatility right from the beginning of the year.

Moving onto December and this saw Wind Band play with many of the other major ensembles in the Christmas Concert held in the Priory. Despite Wind Band being on the larger side, they adapted well to the environment and played some of their best work of the year so far. Once again playing a varied set, they showed the residents of Lancaster just how skilled they are and the beautiful acoustics of the priory magnified their sound around creating an unforgettable atmosphere. They definitely made an impression with their rendition of ‘All I want for Christmas is you’ – something I’m sure the audience will not be forgetting anytime soon.

February saw the return of the Charity Showcase in which Wind Band played with Theatre Society and the Ballroom Dancing Society to perform a mini musical, which this year was none other than – Mamma Mia! The hard work of arranging the music fell to Sean Barlow and Chris Holloway who did a tremendous job of complimenting both the singers and the instrumentalists while making it easy enough to be perfected in just a few weeks. When the night finally came around, everyone played their hearts out and transported the audience to sunny Greece, a welcome change from rainy Lancaster. Wind Band did the society proud and their version of the Mamma Mia showed off another side of Wind Band’s repertoire.

The change over of Committees took place in this busy time for the band and at this time we said thank you to the old reps of Kate Foley and Harriet Sleight and this paved the way for the new reps Fiona Bower and Amrit Phull to take over, who were keen to get started.

Since Wind Band do not traditionally take part in the Concerto Concert that takes place in Lent term; this year saw a brand new concert ‘An Evening with Brass and Wind Bands’ take place in March, a couple of weeks after the concerto concert. Being the first concert of it’s kind, it was important for this concert to make an impression on the players and the audience. Playing their longest set of the year, Wind Band’s enthusiasm did not flail at any point and their varied set once again played to the strengths of the players technique and musciality. Next year we hope to see the return of this concert to allow for even more scope of Wind Band’s repertoire to be showcased to a large audience.

And here we are, at the end of the year and at Wind Bands preparations for the Summer Showcase. The players have been working hard on the selected pieces bringing the conductors visions to life. This is one of Wind Bands must ambitious sets yet and it definitely has the ‘wow’ factor. Without giving away too much, keep an eye on the instruments throughout the set for a special surprise. Wind Band are looking forward to sharing their hard work with the audience and their set is sure to be one to remember (If the conductors ever decide on an order!)

Wind Band Rehearse on a Tuesday evening from 7-9pm in the JHR. For more information contact Fiona Bower or Amrit Phull (Wind Band Reps) at wind@ulms.ac.uk or by messaging the facebook page.