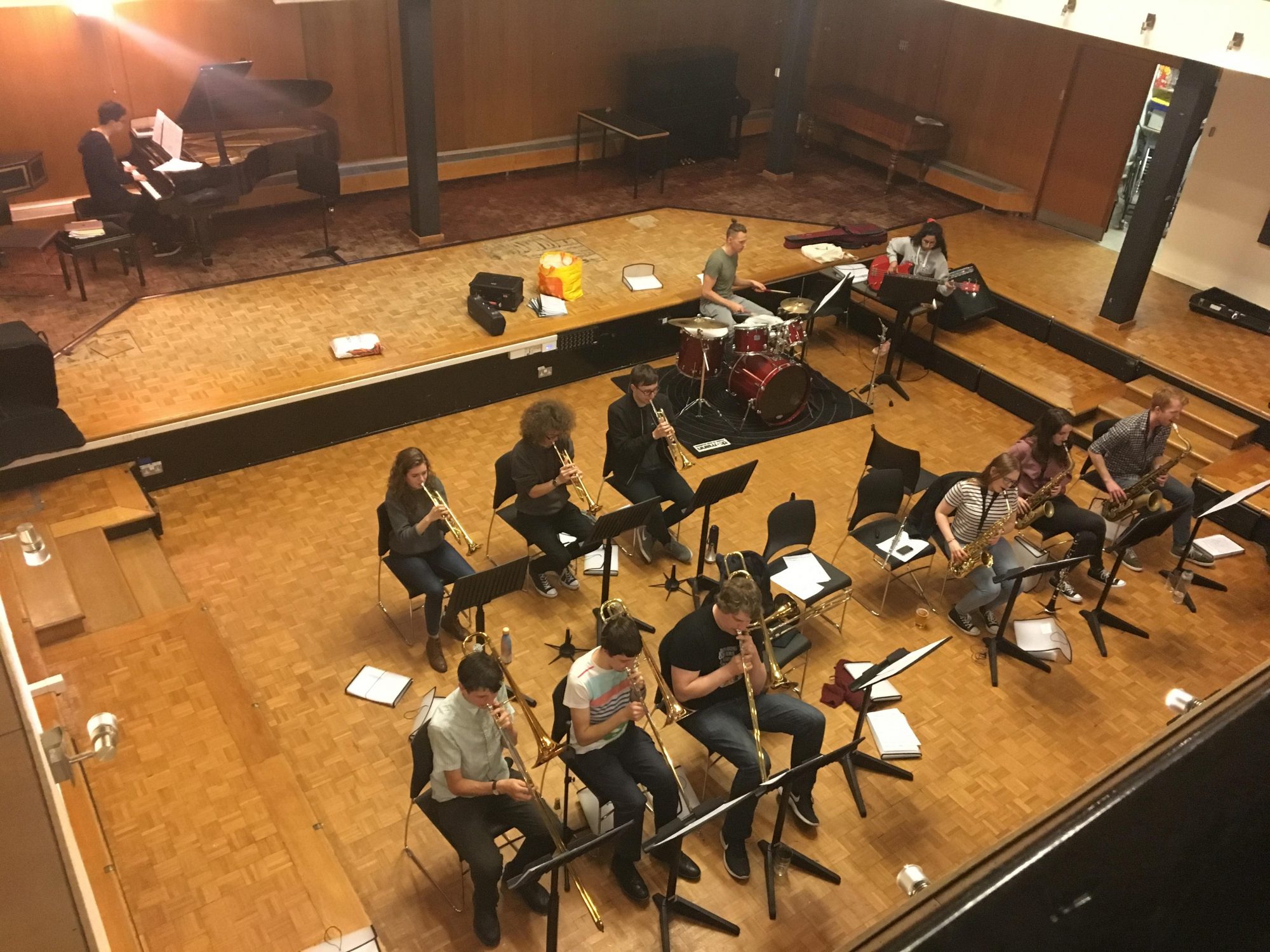 Another day down and we’re one step closer to the Summer Showcase 2019! I hope you’re all getting excited! Next stop on our journey through the preparations is Big Band. Their current rep is Hannah Bayliss and they are conducted by Emily Hinks and Harry Smith 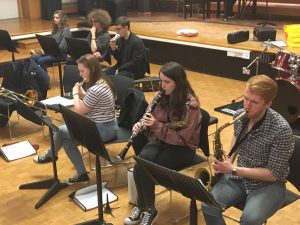 Big Band is our only auditioned major ensemble and
auditions take place in October for all sections of the band where players have to demonstrate their knowledge and skill of jazz and improvisation. Throughout the years Big Band have taken part in many concerts and gigs and this year has been no exception.

We start back all the way to October and the Freshers Concert. While the auditions had not yet taken place, players from last year along with keen hopefuls took to the stage to perform some of the classic well-known Big Band pieces. The band started the year strong and showed everyone just how funky jazz music can be. After one of the conductors graduated last summer, there was a vacancy that needed to be filled and so fresher Emily Hinks stepped up to the plate and joined Harry Smith in conducting the ensemble. Having never done something like this before, taking the reigns so early on was nerve-wracking but she soon showed what she was capable of and has definitely made quite an impression on the band. 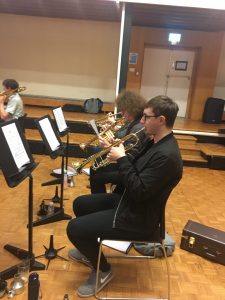 November saw Big Band perform at the Fireworks display on campus. Having only been together a short time, their sound and technique were together and the unity of the band shone through. Even after just a month of rehersals, their hard-work was already beginning to show and despite only being a small concert, it set the benchmark for their year ahead and showed just what they can achieve in just a short space of time. 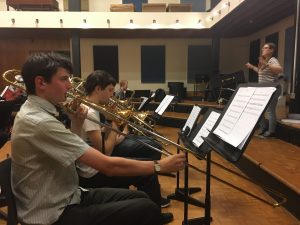 Onto Christmas, which this year saw Big Band (and Swing Group) perform in ‘Hark the Herald Angels Swing’ held in Barker House. This was a new venue for the concert but it did not disappoint. The acoustics complimented the set and instruments well and the venue was large enough to hold a big audience which the ensemble deserved. Big Band played a varied set of Jazzy Christmas tunes which was a pleasant contrast to the more traditional Christmas Concert. This was Big’s first major gig of the year and they truly stepped up to the mark showing off their technique and their improvisation skills. The Band truly made their improvised jazz solos seem effortless and the flawless nature of the players performance shows why these players got through the audition round. 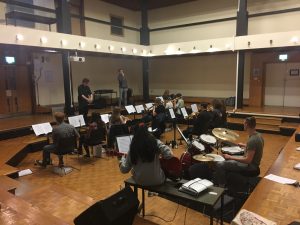 February saw Hannah Bayliss become the representative for the ensemble when the new committee took over. After not having a representative for the past few months, Hannah had a big role to fill in ensuring the running of the band was as smooth as ever. Having previously done the role for a few months last year, she fitted straight back in and continued her work on the Band and in improving their dynamic and sound. 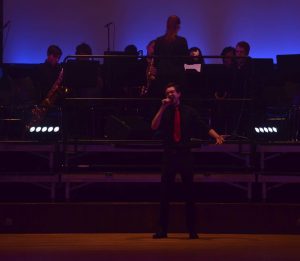 After Christmas saw the return of the annual Charity Showcase. This is a Showcase ran in partnership with the Ball Room Dancing Society as well as LuDans. The Big Band are a well known name in this Showcase as they are the ‘Strictly Come Dancing’ Band (and they do give the official band a run for their money!) Alongside once again performing the Strictly Come Dancing theme song, they performed a select few of their best pieces complete with vocals. It was almost as if they transformed the audience to Blackpool Tower! 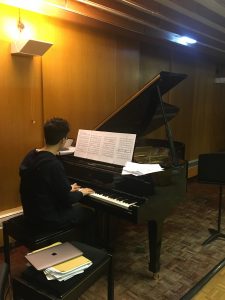 perform at Party by the Pond. This is an event run by the Christian Union by Lake Carter. An afternoon of cake, entertainment and fun. They’ve been working on this set list alongside their Summer Showcase set. Double the work or as they see it – double the fun! They’ve had to pull their socks up and remain determined and focused in order to get all the pieces polished and ready but it’s safe to say they’ve done a good job and are now looking forward to sharing these pieces with everyone. 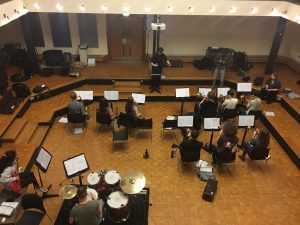 This year Big Band are more excited than ever to perform at the Summer Showcase and their rehearsals have been coming along well. Their set features both vocal and instrumental jazz and swing pieces. From rehearsals you can hear how well these players play together and what good grasp they have on the music. Their varied set will be sure to have you humming along and is a great way to lead into the Showstopper. Big Band have been working hard this year and are ready to share with everyone the progress they have made. 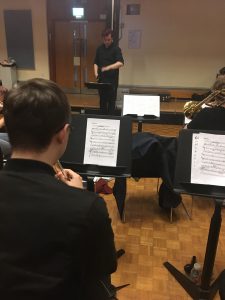 Big Band rehearse on Monday evenings from 7-9pm in the JHR. Auditions are held in the beginning of Michaelmas Term. For more importation contact Hannah Bayliss (Big Band Rep) at bigband@ulms.ac.uk or message the facebook page.

“Big Band have worked so hard towards the Summer Showcase this year. It’s been a pleasure to work with them and we hope you enjoy the set we’ve put together for you!”