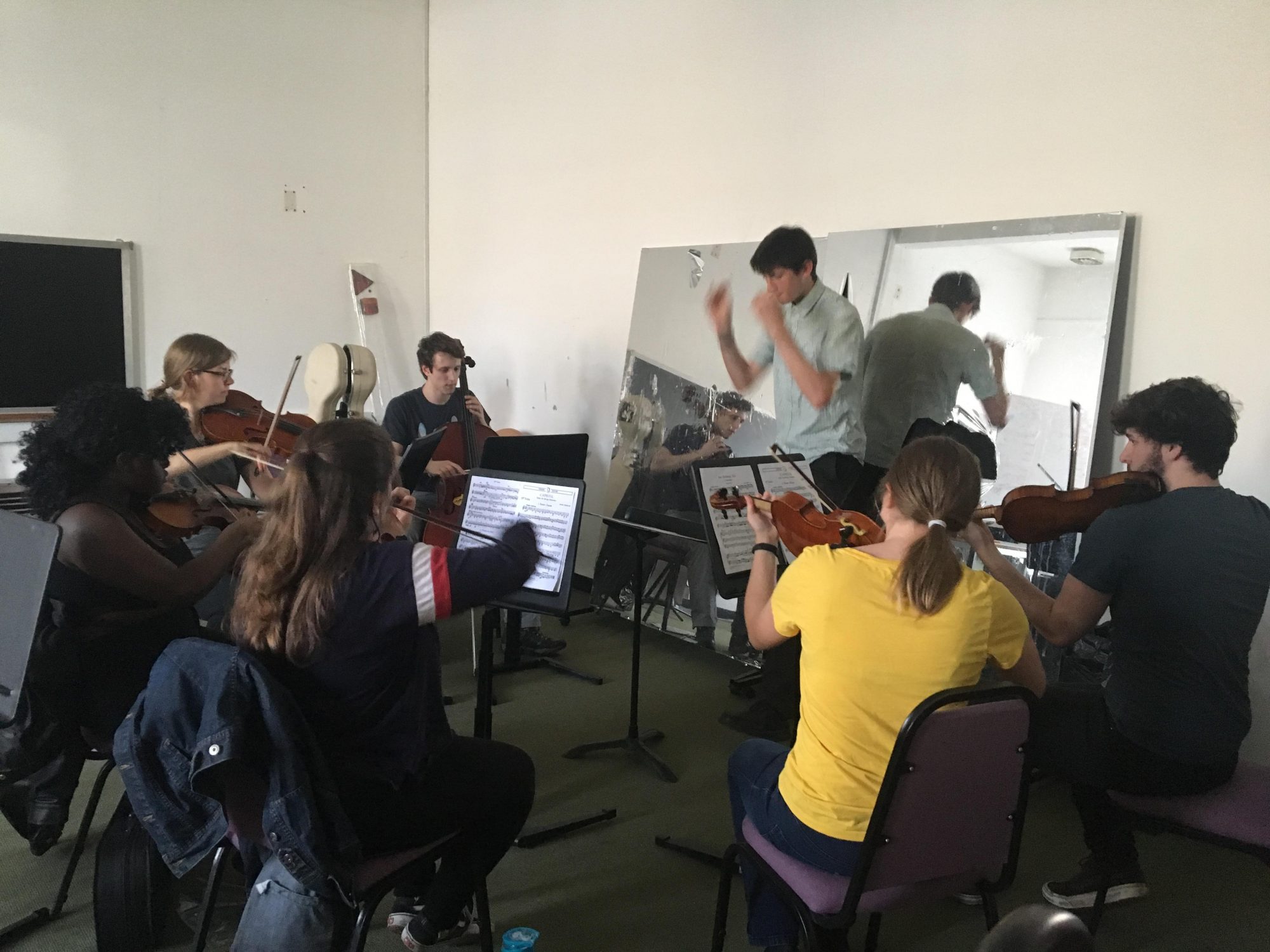 There’s only 11 days, 20 hours and 10 minutes (not that I’m counting!) until this years highly anticipated Summer Showcase. So with the days left to prepare closing in on single digits, we take a look at each ensembles preparation and what they’ve been up to this year. First stop: String Orchestra, whose current representative is Hannah Sames and they are conducted by Robert Eves.

The String Orchestra is one of our smaller major ensembles; but what they lack in size, they sure do make up in sound and technique! They’re made up of two sections of violins, a viola section and finally a cello section. The first term saw the string orchestra rehearse without a conductor but this did not stop String Orchestra from starting off the year strong. The months rehearsing without a conductor saw them learn to play as a unity which has made them a close knit bunch of players.

Starting off with the Freshers Concert back in October, String Orchestra were ready to come back from the Summer Break stronger than before. They took on a shorter version of last years showstopper – Soundshrek – and impressed the audience with the wall of united sound they made despite not having as many players or variety of instruments as some of the other ensembles. With only two rehearsals before this performance, the quality of this performance set the benchmark for what this group can achieve with their hard-work and determination.

All eyes were then focused on their performance at the Christmas Concert. 2017 saw them pull out of the this concert so their return was anticipated by all. Taking to the stage all eyes were on the players to see how they’d come along this term with no conductor. Listening to their set its hard to tell they had conducted themselves all term as their sound was united and strong. Playing the well known orchestral piece Danse Bacchanale by Saint-Saëns along with Pachelbel’s Christmas, the technique and tone of the players were flawless and the sound they created showed just a snippet of what the String Orchestra have to offer.

“This year we were very fortunate to work with Robert Eves as a conductor. Since String Group was initially too small to justify a conductor it was a pleasure to hear the improvement in quality when we began working with him. Since then we have expanded out repertoire into more interesting and challenging pieces”

February saw the new committee take over and we said goodbye to Finlay Gunneberg and hello to Hannah Sames as the new String Orchestra Rep. Finlay did a great job last year improving the sound and image of String Orchestra and Hannah has been keen to continue his work (whilst also lifting his ban on Abba!!). The Concerto Concert in March saw String Orchestras first performance with their new conductor – Robert Eves. While Robert had never conducted solely strings before, he has conducted the Orchestra for over a year and so used his knowledge form that to bring to String Orchestra. The Concerto Concert saw the group take on St. Paul’s Suite by Holst and after another great performance from all players; string orchestra continued to get stronger with every passing week.

That brings us up to Summer Term and the Summer Showcase preparation! The String Orchestra have been rehearsing with Robert every week to bring the audience a highly skilled and unique set list. String Orchestra typically play a mixture of music from the screen, iconic works for strings and arrangements of bigger works putting them apart from many of the other ensembles which don’t feature string instruments. This years Summer Showcase will see them play two new peices they are yet to perform for an audience! The determination and drive these players have really shines through in their playing and their technique and unity is next to none.

“It’s been so exciting working with this group throughout this term, and I’m looking forward to showing everything we’ve achieved during our final performance!”

The String Orchestra are looking forward to performing for their biggest audience yet this year and keen to show off just how hard they’ve worked this academic year. I’m not going to give too much more away, so, if you want to find out what pieces they are going to play you’re going to have to come and join us on 22nd June for our annual Summer Showcase!