It may be miserable outside but tonight inside the JHR was a different story. There was a multitude of laughter, smiling and claps as four of the societies small groups performed in the last Small Groups Showcase of the year.

Dance Band, Inglorious Brassters, Clarinet Choir and Oompah Band all took to then stage tonight to showcase what they have been working on this term in rehersals. Dance Band were first up and complete with hats, performed a varied and exciting set featuring three separate vocalists. They set the mood for the evening with their upbeat and light-hearted 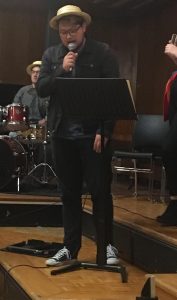 music; making everyone want to dance in their seats. Their set was completed with high energy from the start all the way through to the end. Dance Band are performing again next Tuesday 11th June in Barker House for a lunchtime concert (complete with tea and cakes!) in association with Cartmel College Music.

Fresh from Pendle Live last night, Inglorious Brassters took to the stage to

perform some of their hits. Performing the likes of the society favourite tune Africa, among others, they were an act not to be missed. Formed just this year, Inglorious Brassters have gone from strength to strength in recent months having competed in Battle of The Bands, performing in multiple Pendle Live events, playing at Cartmel Winter Ball as well as going onto perform at Lonsdale Extrav later this month. Their brassy covers of popular tunes have people singing along with them and are constantly an audience favourite wherever they go. 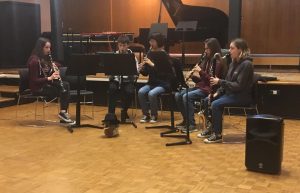 Clarinet Choir were next to perform and did not fail to live up to expectation. Providing a varied set consisting of jazz and the well-known tune ‘You’ve got a friend in me’; clarinet choir did not fail to impress. They even brought out the audience favourite Mii Channel Theme song (complete with awkwardly long pauses) as a much demanded encore to their original set. If you want to see more of them, clarinet choir are joining Dance Band in performing at the lunchtime concert in Cartmel College on Tuesday. 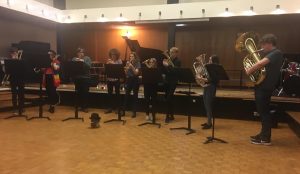 Finally, Oompah Band graced the stage starting their set with the ‘Joseph Megamix’ (from Joseph and the Amazing Technicolour Dreamcoat). Their set also featured another piece from a musical – ‘Grease Megamix’ which had the audience singing along – quite literally. Their high energy set brought the evening of music to a close.

All four of these small groups, as well as the many others who did not perform tonight, have all been working hard this year. A special mention should go to the people who lead these groups and organise their rehearsals as well as the members who spend time arranging music for the groups to perform. If you’d like to find out more about the small groups in our society then please contact the small groups rep Alex Warwick at projects@ulms.org.uk or by messaging the Facebook page.

More information about the Cartmel lunchtime concert can be found here: https://www.facebook.com/events/2254572301294931